When Nick Hamilton asked if I would race the Howard St Dual slalom race that he was organising down the streets of Sheffield as part of the Outdoor City Weekender, I was a little unsure. My last race was September 2015 before I became pregnant and had a baby in November 2016, so I was a bit out of practice. I normally race Gravity Enduro and sometimes Downhill, so dual slalom racing on concrete felt a bit out of my comfort zone. But I really wanted some time on my bike so any excuse to pass over baby care duties to my husband while I ride my bike was a winner. So I registered. Dual slalom is head to head knock out racing. Two racers ride two similar tracks next to each other down a slope, negotiating a series of gates/flags. Both riders’ times are taken then they switch tracks. After the combined times are added, the slowest rider is eliminated. The winner goes onto the next round, until there are 2 riders left in the final.

After an amazing week of weather, it then rained all day the preceding day and race day was forecast to be rather unsettled, so I was a bit apprehensive on what the course would be like, no doubt involving flat, grassy and concrete turns. However a walk down the course got the excitement going and I was looking forward to getting on my bike and getting some practice runs in. 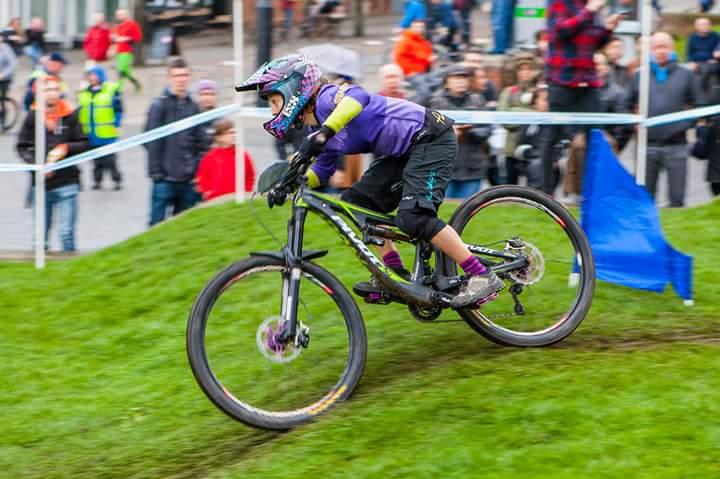 The course started down a long flight of steps then over a set of 4 custom built wooden rollers, setting the rider up for a wooden kicker onto a set of downhill grass rollers with 2 tight flagged corners. The course takes the riders into either a set of steps or a custom ramp then straight into “Chaos Corner”; a flat 180° corner manoeuvring through street furniture. The riders then tackle a series of flat grassy corners with a wooden kicker in the middle. An awkward right hander before the final feature, a fade away; a steep grassy bank into the finish line.

After just a few practice runs, I started to really enjoy it and tried to get in as many runs as I could, partly because my time on the bike is limited these days! As I got more confident, I picked up the pace, though I got a bit wild at Chaos Corner and nearly lost it. We all had a seeding run on the left track which would set us up for the race pairing order. I was happy that I stayed on and ended up with a good time, putting me up front of the lasses. There was a now a little wait until the first ladies race so I took the chance to grab some lunch and feed my baby who was watching from the sidelines.

The ladies were called to wait at the top, and my usual race nerves kicked in. First race was the quarter finals, the ground was wet and I needed to keep cool and stay on my bike. Got through to the semi’s with a win, win. I’d got more familiar with my lines now so needed to pick up the pace to reach the finals. However, I got a bit loose and nearly missed the sharp corner into the fade away! Phew! Another win win but my combined time was slower than the other lass who I was to race against in the final. A big crowd had now gathered along the length of the track. Lots of cheering and heckling could be heard. Adrenaline was rocketing through me now and knew I had to be smooth. On such a short track, the racing is so close. I managed to take the win on the 1st track but only by 0.5 sec so the race was still on. Anything could happen. Track 2 and my opponent had a good start out the gate. I was trailing behind down the flight of steps. After the wooden rollers I cranked hard to enter the grassy rollers. I nailed the corners and caught up, round Chaos corner and just overtook her at the next lot of swooping flat grassy turns. The finish was in sight and I was hungry for the win. Tackled the dodgy right hander, down the bank and across the finish for another win win! I was so pleased. It really made me smile and remembered how much I loved racing! 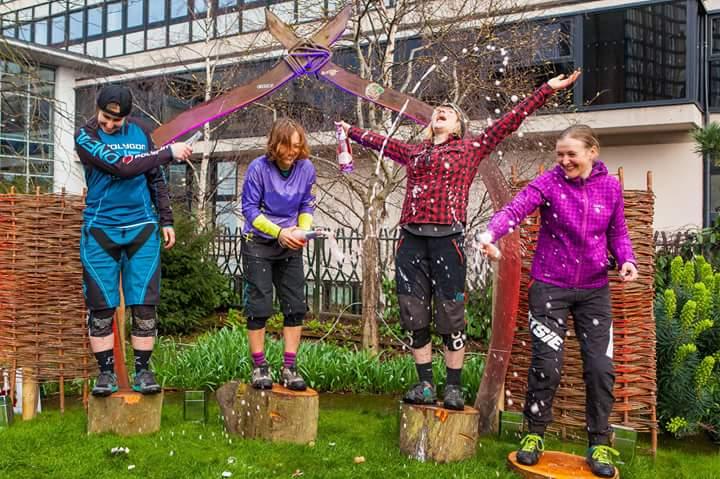 Check out the article on Dirt Mountain Bike.